<< Back to Blog
immersivereality innovation

Immersive Reality in the Sensory Laboratory: From Vision to Reality

isi has started to use Immersive Context in sensory research. The development gives customers ever more sophisticated insights into consumer behavior. Product development can be designed more efficiently, saving time and money.

The Living Room has moved to the Laboratoryr

New product testing techniques make it possible for consumers to be immersed in the environment most suited to the products they are testing. The immersive contexts created with computer programs, props and monitors are transforming sensory research. "This will meet a long-standing demand in sensory research," says Robert Möslein, Managing Director at isi, the Institute for Sensory Research and Innovation Consulting, based in Göttingen, Germany. "We can now test products in different contexts while still ensuring that products are standardized and comparable."

Take a practical example: A manufacturer wants to know what consumers think of a new ice cream flavor. Traditionally, product testers would be asked to taste the ice cream in a sensory lab and compare it with another product. This approach is in one important respect seriously flawed: the laboratory environment does not reflect the situation in which the ice cream is usually eaten, such as in the living room or on the beach. Research over decades has shown us that the assessment of a product is highly dependent on the environment in which the product is consumed. "Consumers only evolve specific expectations in relation to a product when they have been put in the right situation and are in the mood you want to look at," explains Möslein.

This is why market researchers have been highly critical of tests conducted in laboratories. They have claimed they are simply not realistic enough, and lack external validity. Sensory researchers, on the other hand, have argued that testing a product in the right place, for example in a bar or launderette, is flawed because the product itself cannot be presented consistently in all tests under these conditions, so things like temperature or lighting will vary significantly, thus influencing the outcome of the test. Without standardization of these parameters, they say, meaningful analysis is not really possible. In sensory research jargon, tests like this lack internal validity.

Sensory researchers and market researchers have, of course, been getting closer in recent years, and they have gotten much better at linking internal and external validity. Sensory researchers, for their part, have integrated more and more context into the lab. Product testers are asked to visualize specific product-related situations, such as a bar for example, when testing a beer. Or they are asked to watch a bar scene while tasting the product. Things were moving with these developments in the right direction, but they didn't go near far enough for market researchers, whose main concern is always focused on the one simple question: How do we know if the product preferred in the laboratory actually performs better than the competitor's product in the evening in the family living room?

The solution began to emerge around five years ago with new technology that is taking on a transformative role in the field. Virtual Reality (VR) and Immersive Reality (IR) make it possible to transport a person to another world by simply wearing glasses or watching extra-large screens. Programmers create three-dimensional worlds that transform a simple laboratory into a beach bar or bathroom at the click of a mouse. The technology has become more and more affordable in recent years, and sensory researchers have gotten positive results using VR and IR in experimental studies.

"The results really do show that VR and IR deliver more sophisticated and, for some products, better results than traditional sensory tests," concludes Robert Möslein. That doesn't mean that product testing in the lab or at home has become outdated, but rather that VR and IR are particularly suited to test some products and explore specific questions. "They have become part of the toolbox of every innovative sensory company," says Möslein. This is especially true for products whose consumption is strongly associated with a particular context, such as a restaurant, living room or a bar. 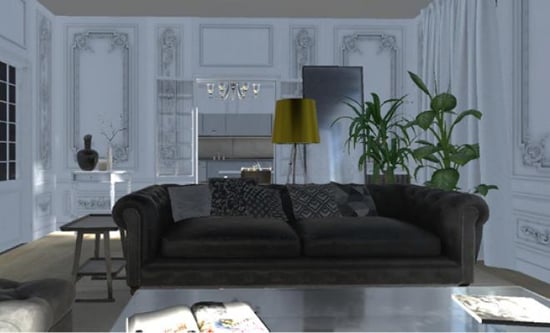 The example above of a new ice cream flavor illustrates the point very well. As part of a client project, Robert Möslein and colleagues asked consumers to compare two flavors of ice cream in the lab. The testers liked both varieties equally well. The isi team then repeated the test in an immersive context. They got the product testers to taste the ice creams in a comfortable armchair and projected a living room scene onto a large screen mounted on the wall. The atmosphere was enhanced using props, included a running TV, carpets and dimmed light. In this environment, the testers were clear about the winner, and it wasn't the client's product. The competition was much creamier and richer. "The simulated context obviously roused more concrete demands in the consumers with regard to their ice cream, and they clearly preferred one sample over the other," explains Möslein. The conclusion for the customer was clear: their ice cream needed to stand out more in terms of sensory experience against its competitor's if it was to make it to consumers' living rooms.

Show Me the Way to the Holo Deck

For Robert Möslein, using VR or immersive reality is a real opportunity for making product development and product optimization more efficient. There's usually a market research test in the final stages of a development. Decision makers may realize that the product does not quite meet customer expectations, in which case adjustments need to be made. "With the help of VR and IR, we can involve market researchers in the process earlier," explains Möslein. The effect is that sensory researchers and market researchers are practically meeting each other in the laboratory. Depending on the concepts the market researchers are pursuing, parameters such as the context - living room, ice cream parlor, beach - can be adjusted early on in the process. No elaborate new interior is needed, just changes in the computer program. "This reduces the overall costs of the development process," explains Möslein.

Immersive methods have another positive side effect. Product testers feel, as has been shown by isi research, more involved in tests, and they report that the time passes faster than in traditional lab tests. That has a positive impact on the test results, and it makes it easier to recruit product testers. Maybe that's the reason there is no shortage of volunteer testers at isi's proprietary Immersive Laboratory in Hamburg. "IR and VR are currently entering people's everyday lives," says Möslein. "And they have been an integral part of our sensory laboratory for several years now. Besides, we can easily use the same methods in other countries."

How Immersive Technology is driving Consumer Testing - an Update

Consumer researchers are using Immersive Technology to introduce real life into the laboratory and...